The long-awaited three-row Lexus RX was finally revealed and we are loving all of the pictures and details that Lexus has released since it’s debut at the LA Auto Show yesterday.  The new Lexus RX L will begin production next week and should arrive at dealerships in early 2018 (we’re guessing February – possibly late January).  Longtime RX fans need not worry, the RX 350 and RX 450h will still be available as a five-passenger model – same size and design carried over from the 2017 model year, but drivers will soon have a choice to make when they upgrade to the new model year: keep their standard five-seat, two-row design or opt for the new six or seven-passenger option.

Both the gas and hybrid models will be available in the extended version of the RX and we are happy to report that the power-folding third-row seat will be standard.  The new Lexus RX L will also get Tri-Zone Climate Control and Leather seating as standard equipment.

Lexus states that the addition of the third row will by no means impact the stylish and popular figure of the Lexus RX and the extended version will be just as easy to maneuver as the current model.  How is this possible?  Lexus explained the new “packaging” in their press release:

“With the help through the mastery of vehicle packaging, Lexus extended the body length 4.3 inches at the rear and used a steeper tailgate window angle than on the two-row models – ensuring good headroom for third-row passengers.”

Passengers can access the third row easily and with “the touch of a lever that slides and folds the second seat forward” – we expect this to work like the GX seats do now.  Lexus will also offer a new six-passenger configuration which features second-row captain’s chairs (this will be standard for the RX 450hL).

Lexus designed the new third-row of the RX L so to provide the same comfort as the middle row by positioning the second row slightly higher than the third row, creating more foot room for passengers.  The extra climate controls in the back plus two super cute cupholders help complete the package and provides a perfect visual for families looking for some extra seating. 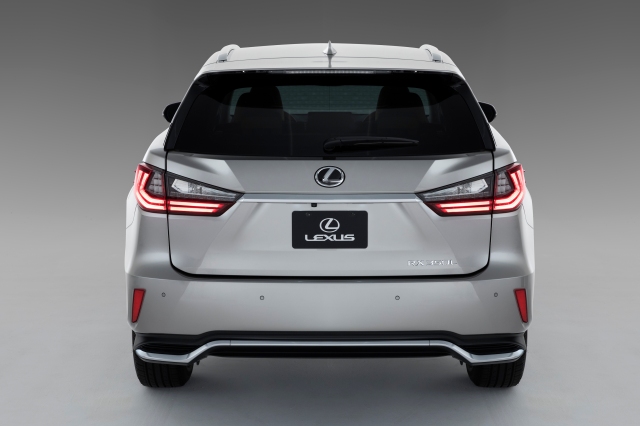 For more information and to stay in the loop on the RX L release, you can sign up for the Lexus Fast Track here.